One of the cool things about the release of “Pacific Rim” way back in 2013, was the obviously awesome inclusion of Idris Elba as the way too cool Marshal Stacker Pentecost. Seriously, the name alone let’s you know he’s gonna be a super bad-ass who saves the day right up front.  He came to stack the pain and do it with epic religious fervor… awesome.

In the second movie, we find Stacker’s son Jake Pentecost who’s gone somewhat rogue in his life but was apparently part of the Jaeger Program but fell from grace due to over zealous efforts on his part. He essentially devolves into a self serving scavenger of old Jaeger parts who is drawn back into service as a condition of being caught in his illegal activities. At this point, the war with the Kaiju (giant monsters from the depths of the ocean) and their masters is ten years past, but humanity continues the Jaeger program just in case. Of course, the peace and fragile recovery that humanity is interrupted when a mysterious Jaeger appears and wreaks havoc on our heroes. This takes us into a mystery that threatens to destroy humanity and see the return of the terrifying Kaiju.

Going back to the original film, I have to say that it seemed to mark the beginning of many possibilities for the production of some live action anime films in the future. I felt it was an immediate avenue for this genre and was glad to see that they were bringing this out at the time. We certainly have the movie technology to achieve a very good rendition of “Dragon Ball” films that are convincing I think. One of the really amazing things about that film and its sequel is that they are so aesthetically amazing to view. That may be the saving grace for both films. I found myself staring at the screen and having to pull back a little to really grasp the story because I was simply enjoying the visuals way too much. 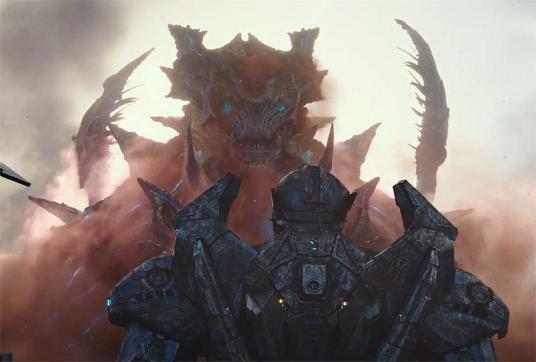 That is the start of the good and maybe even the best part of this flick. But what about the story? This is a coming of age story albeit a little on the generic side. What I mean is the character development was quick, not much time spent in the characters contemplating their many failures that led to the currently situation. We get Jake Pentecost who is established as a potentially brilliant Jaeger pilot and a genius girl who builds her own Jaeger before the plot even begins. Both of these characters for a quick bond, come to terms quickly with their pasts and spring into action to save the day. Pretty generic as I’ve stated. This of course is the kind of thing that garners criticism, which is a really funny thing to me in the sense that this movie nor its predecessor are meant to be heavy in plot and seriousness. It’s really just meant to be fun and that’s exactly what it is… fun with a measure of intensity thrown in. In a nutshell, “Pacific Rim: Uprising” is a light storied special effects extravaganza that shows the potential for some really cool anime based storytelling to come. I mean, I would really love to see a remake of “Johnny Sokko & His Flying Robot” or “Space Giants” on the big budget, big screen.

No Idris Elba. Seriously, John Boyega even states that if his father were there, he’d deliver a speech that would make all of them feel invincible. He lets everyone know though, that he is not his father and then delivers a speech that made them feel invincible anyway.  Joking aside and as I’ve said, the story is pretty cut and dry generic but I think it serves its purpose. Despite this, I definitely want to see the next one. For what it is though, I don’t have many complaints and urge those who have seen it and want to see it to take it as the popcorn movie that it is. If you’ve seen it, let me know what you think in the comments below.