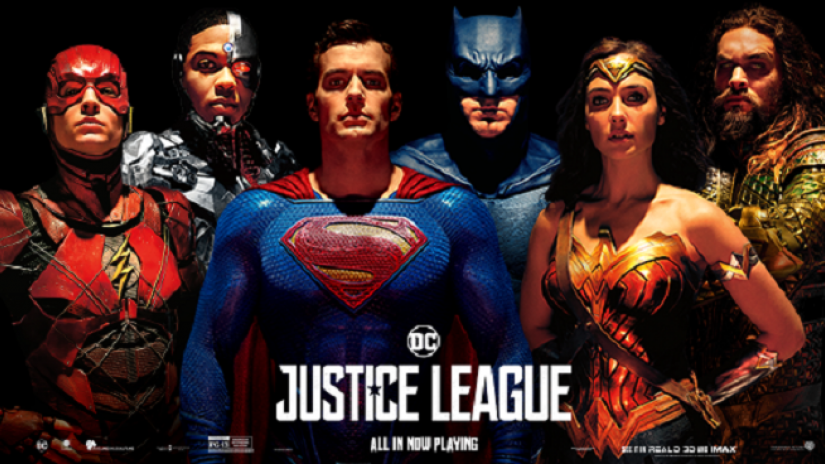 I threw the “sigh” expression in the subtitle for the simple fact that I think that “Justice League” was plagued by missed opportunities.  What I mean is, I think it could have been done a lot better.  I don’t think I’m too far off in stating this as it seems to be a consensus amongst the movie viewing community as well as folks I see on a daily basis.  With that in mind, it was overall a decent film.

In this DCEU outing, we have Batman and Wonder Woman continuing their efforts after the events of “Batman vs Superman”, to find and convince a handful of people with super abilities to join them in preventing impending doom from befalling the Earth via an invasion of hostile aliens in the form of Steppenwolf and his legion of parademons as they seek the Mother Boxes to unite them and be granted the power to achieve victory.  The premise is solid and the motivation for Steppenwolf is clear – to avenge himself of past failure and regain the favor of his master Darkseid.  This is a definite threat that not only terrifies the Atlanteans and Amazons but is motivation enough to also unite Aquaman, Cyborg and the Flash with Wonder Woman and Batman in an effort to thwart the desperate plan of our villain.

So, taking a look at the actors and actresses in this flick, I really wish to remain as fair as possible when assessing their performances.  For that I think I should reflect on “Batman V Superman” and the “Wonder Woman” movies before adding a commentary on the additional characters.  Well, let’s actually start with “Man of Steal” because I think that’s what started this current effort at the DCEU playing catchup to Marvel.  “Man of Steel” was a pretty serious take on Superman which I’m definitely ok with… no watering down necessary.  We have Clark Kent who is essentially at the point where he is coming to terms as to what he should actually be doing with his Kryptonian powers and is prompted to act due to extreme circumstances.  Not too unusual of a plot device.  Probably my issue is more of the execution of the role by Henry Cavil who I think is a good actor but seemed a little flat in his portrayal at times.  But I’ve seen Cavil act in other films and he does a great job.  So, maybe it has to do more with the direction of Zack Snyder, that is to say, the tone he sets for his films and the actors involved in it.  I say this because some of the other actors seemed to plateau at times also during the film.  I think the same could be said in “Batman v Superman” where Ben Affleck and Gal Gadot, as well as Jeremy Irons seemed to have this same issue.  Yeah, maybe that’s the problem.  I mean, what Zack Snyder does essentially works but maybe he can sometimes get in the way of that portion of the creative process.  That’s always been my argument for the overall issue for the Star Wars prequels…too much George Lucas getting in the way of cast & crew and what they can do if left to it.  Sounds like a subject worth discussing…hmm.  Anyway, moving to “Wonder Woman” under the direction of Patty Jenkins, we get a much more dynamic performance from Gal Gadot.  Switch back to “Justice League”, Wonder Woman suddenly went back to a somewhat inconsistent portrayal in my humble opinion.

I think that many are aware at this point that “Justice League” was plagued by many changes that occurred during the production timeline up to and including Zack Snyder having to leave the production due to a family emergency.  That’s certainly a disturbing situation as the studio would now have to pick someone else to complete the project to release.  But that may not always be so bad.  I think what’s worse is the fact that there’s that vacuum that forms in between changing directors.  That’s the time where you get the studio executive “free-for-all” where all business sense kicks in and creativity gets shoved into a dark corner.  I’m sure there were smiles and pannick colliding as poor decisions and a big fat rush job was placed on Joss Whedon as he took the reins of the horse now heading towards a cliff.  I understand that moviemaking is a business and that there’s a bottom line like any business, but I feel for directors when their creative impulse is stifled by red tape.

That was sort of the impression the film left on me when I viewed it.  In addition, I had just heard about the studio limiting the time on the film to under two hours, something I always find disturbing for movies and other content of this scope.  So I was naturally a little antsy upon taking my seat because I was sure I’d be getting a two and half hour show before that bad news.  When viewing I got exactly what I was expecting; something that was decent overall but felt choppy as though there was so much missing.  I really don’t understand that studio decision and I don’t think it was a good one at all.  There, I said it.

Still, it wasn’t bad movie by any means but could’ve been great had it been given more time and polish.  The skinny is, we had a decent villain that could’ve used more fleshing out, we had 3 new superheroes who could’ve used more fleshing out and the other two lead superheroes that could’ve been allowed more dynamic range.  Superman I think worked in this outing simply because he wasn’t available for most of the film.  But, again, if the film had gone to it’s full fruition, we probably could’ve used more of him as well.  Too many things missing especially for Ray Fisher’s character of Cyborg.  Just not enough to really feel the impact of his contribution.  Along with this, we have Wonder Woman who felt like she was relegated to playing den mother to the boys, Batman who seemed to take on a quirkier role than usual, the Flash who got some of the Cyborg treatment but slightly better and Aquaman who carried a surfer dude vibe for the film.  Now, to be fair, supposedly a lot of the decision to cut certain things from the final film were based on the fact that we’re getting solo movies for the added characters.  That brings things back to the pertinent point though that the DCEU movies are being rushed and that the folks that are producing all this stuff forgot to take Marvel 101 in film school.  Sigh… too bad.

Ok, I’m done with my rant.  The truth is, it was still a good movie that I plan on watching again and I’m thankful that they’re being made at all.  If I get too down about the films, I can always rewatch the DC animations.  “Justice League: Doom” anyone?  Again I think this movie is a solid view for families and fans of DC and I’m looking forward to the future movies.