So CBS finished up on their first season of “Star Trek Discovery” which also rounded out their first successfully completed original show on their new streaming network. But I’m not too concerned about that scenario and information can be found on that here at Cinemablend. In my opinion, there are too many folks jumping on the streaming train and things are starting to become a jumble. What I am thankful for is that we at least get some more scifi and some more Trek. So let’s recap.

“Star Trek Discovery” finds Starfleet officer Michael Burnham in a pickle as she instigates a galactic war between the societally conflicted Klingon Empire and the staunchly principled United Federation of Planets, a war of which will have lasting historical consequences. For most Star Trek fans of at least “Star Trek” the original series (TOS) and “The Next Generation” (TNG), this is an event that we’re familiar with but had never seen on screen until now. From that perspective it’s immediately exiting and I think the most important aspect was the actual execution of the storytelling. So, does CBS succeed?

I know one of the immediate concerns for “Star Trek Discovery” was the overall look of the show. That is, the show looked eerily similar in style to the J.J. Abrams 2009 reboot of “Star Trek” which, in and of itself, was ok but threatened to undermine the look of the TOS timeline shows. This was simply an issue because CBS promised viewers that the story was in “Star Trek” prime timeline and essentially rolled into the events of Kirk and the gang (perhaps more accurately Captain Pike and crew). Anyway, that was certainly more important and the aesthetics could probably be explained away by the specific time period in question.

I was unusually concerned about this outing of “Star Trek” for a few reasons. For one, I was really annoyed that CBS was using it as bait to get everyone to subscribe to its CBS All Access streaming service. I thought that was really a low blow to Trek fans and a little pointless for non fans. They may have been better served plugging some other original content with general fans versus baiting with such a niche show. This is one of the things that I felt threatened the integrity of the story because it turns to the whole possibility of creating a story that’s potentially not Trek in nature to appeal to the masses. And honestly I would love to bring on more fans to Trek as well as other scifi just to prompt studios to do more of it, but I refuse to watch it in a state that hampers the essence of the stories for the sake of just bringing on extra viewers who aren’t really loyal to the genre in the first place. I think that’s always a long term mistake even in a business sense. Trekkies and Trekkers are rabid fanatics and will consume anything “Star Trek” for the rest of their lives and probably force their poor children to participate as well. So the revenue stream is always going to be there, no need to cheapen the experience to make it generally popular. Experience has proven that the viewership will fluctuate as seen from TOS to Enterprise. Each one of the shows has garnered their own specific viewership and only the elite fans have watched and loved them all. So, just focus on making a good show. Enough said.

One of my other complaints was the look of the Klingons. I’m not really sure of the choice to change the look of the friendly neighborhood bullies from the aesthetic that was “The Next Generation”. I thought they nailed the look in that show and they rolled nicely through the other Trek iterations. The cool thing was that they actually take the time to explain the look change from TOS to TNG and it was actually plausible. So why change the look? Maybe someone can comment about this one. But anyway, they were certainly different and I found them to be a little more scary than other versions of Klingon on screen. I felt really threatened by them, but more disturbed.

Ok, my last point is more of a little rant I think. So, “Star Trek Discovery” is a prequel. I guess that’s all the rage right? I was really hoping that the next Star Trek outing would be in the 25th century where the Enterprise G bumps into Buck Rogers and they hook up to rage across space and cleanse the universe of the tyranny of evil everywhere. Ok, so that’s an exaggeration but it would’ve been cool to see some trans warp travel and some adventures on the outer rim of the galaxy or something. I don’t know, just wishful thinking.

The good stuff is, we get some Sonequa Martin-Green, Michelle Yeoh and Jason Isaacs. That’s always a plus right. The chemistry between these three is very good along with the other players on the cast. Everyone is definitely there to throw their best acting chops into the bowl. This situation is of course quite different from the usual command crew scenario that we see in other Trek shows. Whereas the other shows always displayed a command crew that was close knit and prevalent within the continuity, this one sidelines a lot of that structure. What I mean is some of the bridge crew and command team may only have one liners. What they did do was include a crew member (Sylvia Tilly) who was bucking to get into the command program and the show explores her journey to achieve this

goal. That was something a little different for Trek as well as the treatment of

some of the other characters. This is part of the deviation for “Discovery” as they seemingly attempted to break to normal mode of characterization. “Game of Thrones” is famous now for having disposable lead characters, so I think many shows have adopted this bit. “Discovery” also jumps on this bandwagon. I won’t spoil anything here but we do lose characters you otherwise think would be part of the show for the duration. Now that’s not to say that there aren’t possibilities for the characters to return somehow, it’s just that they were offed in the name of storytelling. This was somewhat refreshing but also gives the situation an unstable feel. You can never quite get comfortable with characters you fall in love with. That may be a good thing.
As I mentioned, this is a storytelling of the events of the Federation’s war with the Klingons that’s mentioned consistently within the Star Trek universe. It’s kind of like “Star Wars” where you wonder in the back of your mind about how the Rebels get the plans to the Death Star, something “Rogue One” spells out for us. It’s one of those things that was cool to see, but it would’ve really bugged me much if I never knew. That’s kind of the what’s happening in “Discovery”, but I think there’s more at stake. This is a larger conflict that had even greater repercussions on the galaxy as a hole and determined essentially what comes next for our heroes. The Klingons being brash bullies, you still wonder in the back of your mind what the heck the Romulans were doing while all this was happening. They probably hate the Federation even more than the Klingons. My point is the show has a lot of potential for prequel storytelling and they’ve seemingly decided to tell it from the point of view of Commander Michael Burnham.

The other point of the show is that it is solid storytelling and the look of the show is beautiful with very clean set pieces. Despite the initial complaints of the U.S.S. Discovery itself, I like it. It seems to have a transitional mix between the Constitution class Enterprise and the Enterprise NX-01 which was the original. The Discovery exists in the same time period as the Enterprise NCC-1701 but almost feels slightly more advanced. I don’t really know that the show has explained that quite yet, but it’s something to ponder. Anyway, when I first began the show I had to push a little bit to continue it and wasn’t sure what I felt about it overall. But, at one point there is a switch in the issues that the protagonists are dealing with and there is a couple of twists. The former made me scratch my head and wonder what the heck they were doing and the latter re-invigorated my interest which made me feel I needed to finish. I don’t want to spoil much but it does have to do with the alternate universe and the Terran Empire. I thought it was risky and a bit of a cheat, but it worked. 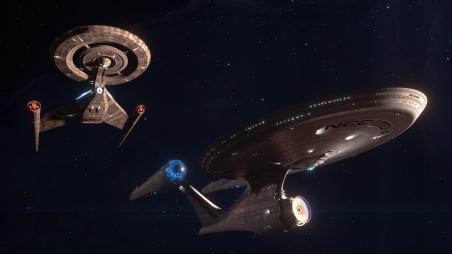 Overall “Star Trek Discovery” is a decent overall viewing experience and is best entered into with an open mind. If you’re a “Star Trek” fan then you may have some apprehension about what’s occurring and how it’s occurring but it’ll be very subjective. For the general audience, hmm… I don’t know. It’s a decent show for those who can get past aliens and just enjoy the human drama. It’s definitely not a traditional Trek show in terms of the geeky technobabble versions and perhaps a little more palatable for the general population. Too bad it can’t just come on good ole CBS and be ported later to Hulu and Netflix. But, comment below and let me know your thoughts on this show if you’ve seen it.

One thought on “Star Trek Discovery: Season 1 – Mixing It Up”